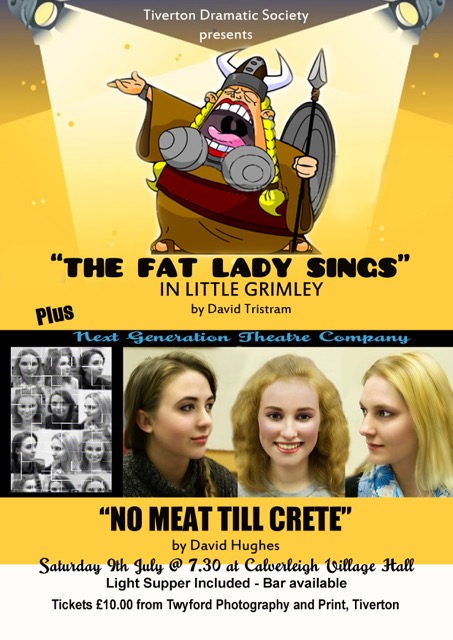 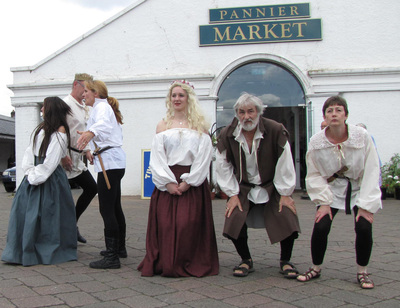 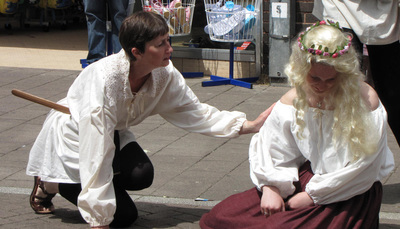 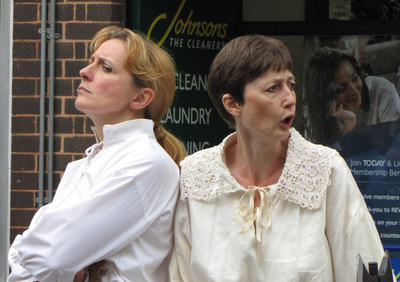 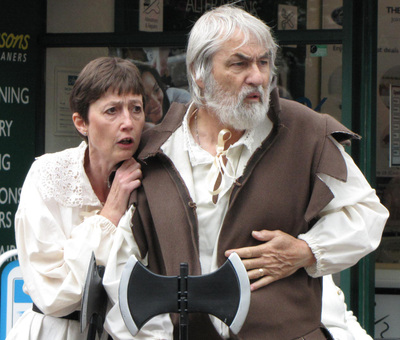 A Murder Mystery with a touch of comedy

The events take place at the wedding reception of George and Belinda. George’s family and friends are very aristocratic and from old money. Belinda’s family are very different, they are loud and brash and love to splash their money around. They have spared no expense on the ‘wedding of the year’.

Frank, Belinda’s father is an evil gangster who knows everyone’s secrets, his wife Sylvie is an ex-glamour model who has secrets of her own. Add into the mix a drunken uncle, a mad grandmother, and a rather dodgy Politian and the fun begins. Against a background of embezzlement, gambling, politics and even murder, the wedding reception proves to be a time of revelations, confessions and deadly deeds and the wedding guests are left to solve the mystery.

A Murder Mystery with a medieval difference.

An excerpt from William Shakespeare's famous play played to five venues during the summer. 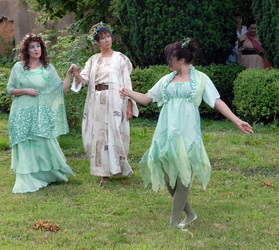 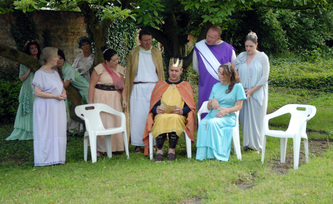 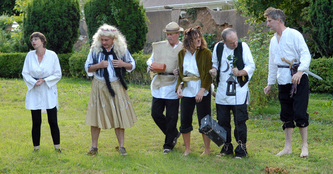 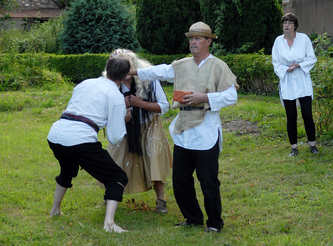 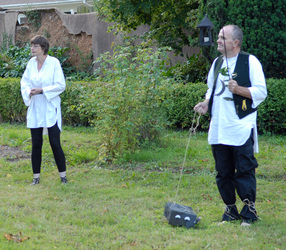 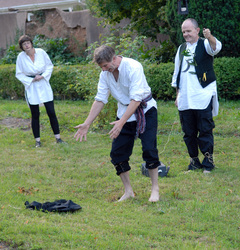 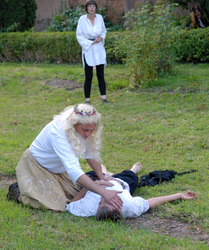 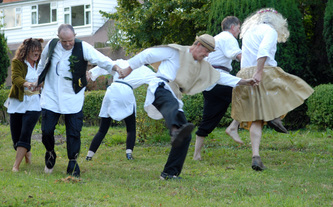 Twenty years after Dickens' Oliver Twist: Oliver is holding a dinner of invited local dignitaries and pillars of society to explain plans for his latest charitable venture to support the poor and destitute. The big news is plans to open the latest Twist home nearby. He has recently come into an unexpected inheritance from Mr Sowerberry- the undertaker to whom he was briefly apprenticed as a child. He has also written an expose of the people from his past;  so who are respectable business people now? Oliver is murdered and the murderer is to be uncovered. 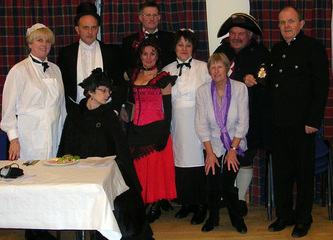 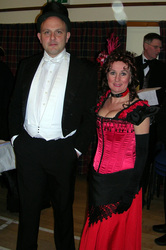 A man dies and all of the family gather for the reading of the will. Each person gathered is suspicious of another of having murdered the deceased man. Arguments ensue and finally the truth of the murder is revealed and the revelation is rather surprising.
No photographs are available of this production.

A hospital patient, Smithy, suffering from amnesia after a blow on the head imagines a patient, George, is in the adjacent bed in the ward. The doctors and nurses treat George as a real patient to placate Smithy and this leads to some hilarious events. 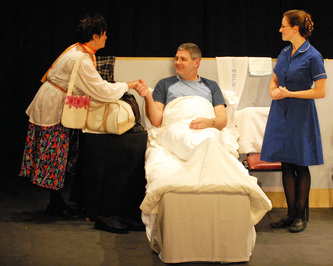 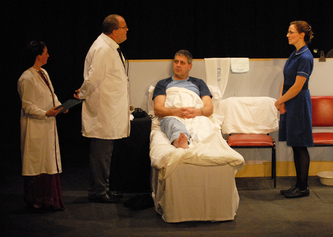 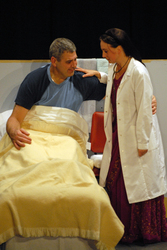 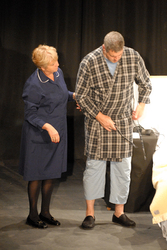 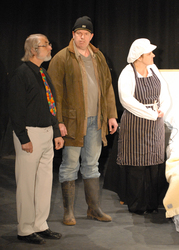 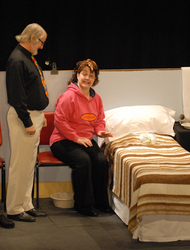 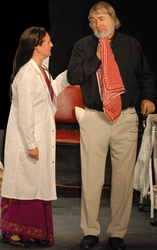 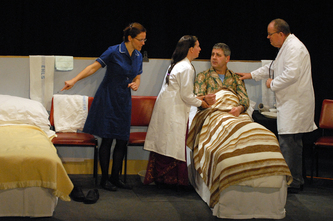 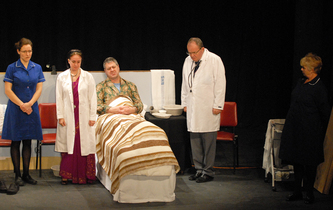 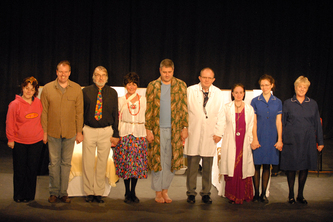 Who killed Sir Marcus Hetherington Smyth? Was it his wife, Cynthia or daughter Briony? Perhaps it may have been Nigel, his brother or Arnold, the downtrodden Butler. Did Caroline Shepherd have an abberration and kill him even though she is a police inspector? An evening of intrigue and complexity revealing secrets and illicit relationships one by one. It is for the audience to solve the crime before the Act of revelation - Act 3. 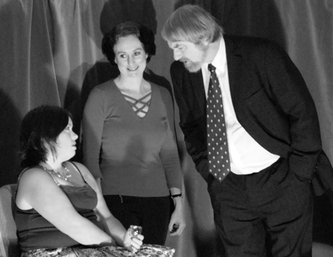 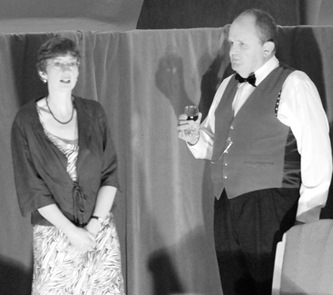 An evening of monologues and duologues followed by a production of the melodrama 'Hiss the Villain' written by A R Taylor and W Ernest Cossons.
Synopsis of the melodrama: A wealthy banker falls on hard times but sees his chances of wealthy living re-emerge when a rich old seaman deposit ten thousand pounds in gold in his bank. The seaman discovers that the banker's credit has become poor and demands his money back but the latter denies all knowledge of the gold deposit and, aided by his clerk, robs the seaman who, in a state of shock, dies. The clerk retains the receipt of the transaction and blackmails the banker, Silas Snaker, into giving him a share of the gold. Meanwhile, the sailor's family are starving and cannot neither afford the food to eat nor the fuel to heat their meagre attic. The clerk, Bowler, wastes his money and suffers similarly until he by chance comes across Snaker, now having recovered his wealth, walking the streets of London and taking the air. Bowler blackmails Snaker once more and all of the time the latter is plotting a revenge. However, Snaker is out-manoevred as every step. Eventually the ridiculously happy ending is in sight and all live to fight another day - except the dead seaman!

Bumped Off by John E McDermott
A whodunnit farce consisting of characters such as the Colonel Sir Rodney Gung-Ho - a retired army officer who loves his shooting and fishing in the outdoors. He is keen on betting but struggles to keep his habit away from his wife (Lady Phyllis Gung-Ho), who controls the finances in the household. Lady Phyllis meanwhile is a snob, with a very strong mind and will. She loves entertaining in her large country home and invites guests over where she can. She is close to her daughter (Caroline Gung-Ho) and wants her to 'marry well'.
Caroline, a real "mummy" and "daddy"s girl is a successful accountant and has attended university. She is in love with, and soon to marry the Reverend Claude Smithers, who is a bumbling minister, and can always find a quote from 'the book'.
Winnie Miller is Lady Phyllis' American friend from university, who has come over to visit with her daughter, Sadie Miller. Sadie is a highly emotional girl, and is engaged to Oliver Smooche.
Oliver is the local bookie and bully boy. He worked at the university that Caroline attended and had an affiar with her. He wants to marry Caroline so he can get his hands on her fathers estate, and threatens to spill the beans on their affair, in order to jeapordise Caroline's relationship with Claude... He has already told Sadie their engagement is off... Sir Rodney is in debt to Oliver, who will stop at nothing to get his money back. Mr Smooche has also had an affair with the daughter of the Colonel's butler, Stanley Binge.
Binge is the Colonel's sidekick and 'batman' and is very fond of the Colonels whiskey and is shocked and cross to see Oliver appear on the scene again, after him having treated his daugher so badly...
A murder ensues, but whodunnit...? After all, everyone has a motive...!